The Lone Horseman is a ghostly phantom found in tales throughout the Nordic countries. According to legend, he will appear only on the darkest of nights and only when the polar lights ignite the skies. A knight in shining armor on a majestic bright white horse it is said, but no one really knows. Because no one has lived to tell. At Amager you risk meeting The Lone Horseman on the desolate and windswept Kalvebod Commons, if for some godforsaken reason you should wander this wilderness area on a deep, dark night. If you do, you’ll most likely be hopelessly lost, because even the bright lights of nearby Copenhagen will be dimmed to black out there. And if you then hear the distant snorting of a horse and hooves slowly approaching, you may soon spy a gentle, gallant and soft-spoken knight who will offer you a ride – out of the darkness and back into civilization. And as tempting as it may seem to accept his kind offer, you must now instead flee. Flee as fast as you can. But it will most likely already be too late, as that kind and mesmerizing voice will lure you in. But no one who actually climbed the The Lone Horseman’s horse under that black Nordic sky, has ever been seen again alive. Who he is, nobody knows; but that he’s still out there, everybody knows.
This is a collaboration beer made with Modern Times Beer, CA, USA. 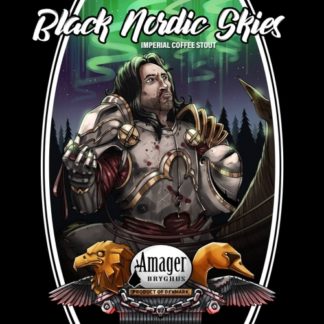